At the beginning of the summer, my lovely family and I embarked on a trip to Ottawa, as I felt it seemed fitting that we spend Canada's 150th birthday in the capital city. While some parts of the weekend felt like "a series of unfortunate events", it was still an eight out of ten vacation.

If it was one thing I was not expecting in Ottawa was the amount of rain that fell over the course of the weekend. It was fine and dandy when we first arrived but by supper time it was raining cats and dogs. We ended up eating at one of the restaurants we went to last year. It's an Italian spot, and one of my favorite restaurants in the city. Once that was done, we went back to the hotel. Jerrett and I went for a swim (and some old lady asked if we were French, and we said no.)


The next day started with a hunt for breakfast, and we ended up going to the same French cafe that we frequented the last trip. After that, we met up with the Clarkes (Uncle Al, Aunt Lisa, and Allison).  The day was pretty much spent exploring the mall and walking through the Byward Market. We also got Beaver Tails (the pastry), watched some pretty interesting street performers who stole each other's one liners and then went to Major's Hill Park.

When we left the park we went to the Cornerstone restaurant, which to our dismay had a limited menu for the weekend (RIP fish tacos). Allison and I then decided to go on a hunt for ice cream while our moms and Jerrett did a dollar store run. Promising our dads that we wouldn't go far, we went around the block. we didn't find ice cream, but we found gelato; which we decided was better than ice cream anyway.

The next day was Canada Day, and that's when the fiasco part of the trip began. We made a plan the day before and thought it was foolproof. However that morning, the Clarkes decided to go on to the line without us (I don't blame them, Dad wanted to sit down for breakfast.) and they got into Parliment Hill pretty quickly considering the expected crowd. My family wasn't as lucky, as when we finally got in the line, it started raining cats and dogs (thank the lord we were prepared). We thought it was the right line, and as we started to move, we were told that the line was congesting the city bus route. Without any direction, we hesitantly followed the crowd, hoping we were going in the right direction. Once we got to the new line, it became two lines merging into one. With no, and I mean zero crowd control, as in it ended up turning into a bottle necked mob. People got really impatient and restless. We decided to try and worm our way through the mob. As we got closer to the security gate after what felt like forever and on and off rain showers, we found out (it wasn't even announced) that it was closed until the opening ceremonies were over. Despite the urge to give up, we stuck it out for four hours and finally got on Parliment Hill between 1 pm and 2 pm. We found the Clarkes and a pretty good spot to settle down for the rest of the day.
At this point, the rain had stopped, which was a relief. A variety of acts came on stage, from dancers to poets. We also watched a citizenship ceremony, which was pretty interesting. In the middle of the afternoon, a friend of mine from Flatrock. named Lydon (whom I haven't seen since January because he was going to school in Ontario) after an even longer time in line, found my fam's spot and he hung out with us for the rest of the day night.
After suppertime approached (thank goodness Mom and Jerrett went to get sandwiches at Tim's, as there were no food services on the hill) it began to rain again, with thunder and lightning not far behind. We took evasive action, putting on coats and ponchos, covering the bags and opening umbrellas. The entertainment continued, while we made the best of it. (Allison even danced in the rain.) 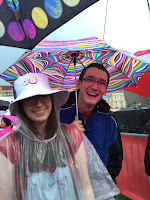 The finale got delayed because of the weather, along with the sound and light guys having trouble with the screens and spotlights. The crew had to wait till there was a break in the shower to climb the structure (I don't know what it's called, Lydon would though) and fix things. What felt like hours later, after Uncle Al and Allison went back to their hotel, the finale finally started. Not long after, however, the screen on our side of the hill stopped working. Mom, Jerrett and Aunt Lisa took off to the other side, leaving Lydon and me in the crowd. We went to find the others and with the mass amount of people (this is one of the many times having a friend who's over 6 feet tall is helpful, as he can actually see over the crowd.) We passed the fire pit and then walked into a pile of mud. I felt it squish in my sandals, but we had no choice but to go through it. It was at this point I looked at Lydon and said: "this would bother us more if we weren't Newfoundlanders" which resulted in a "true" and a chuckle. We located the rest of my fam but stayed in this good spot we found until we decided to retire and get off the hill ahead of the crowd. We met back up with the rest of my family and watched the fireworks from the Rideau Canal Bridge. Once that was over, the adults went back to the hotel, while me, Lydon and Jerrett embarked on a mission to find food after midnight. Thankfully, we ended up finding a Subway (after my brother asked a bouncer where to get food) and then journeyed back to our hotels.

The next day started with me, Jerrett and Allison going on our own little adventure to get lunch. After that, we continued our adventure to look for Beaver Tails (which sadly had a limited menu, no Nutella banana and cookies and creme for us). We then encountered our dads, and we headed to the mall to meet up with our moms/wives and figure out a plan for the rest of the day. We also ended up meeting up with Lydon again there as well. Me, Allison, Jerrett and Lydon decided we'd scout out the WE Day concert, and if the line up was too long we'd just go back to my hotel for a swim. When we left the mall, it was once again pouring rain, so we went with plan B. The pool was a bit of a disappointment, as it was only 3 feet deep, but it was still fun. After that we all went back to my hotel room; once we were in dry clothes again we hung out for a bit thinking of what to do next. It was then Lydon contacted his friend Max, and we decided to go to a board game restaurant.
We walked for a couple blocks and then found Level One. We met Max and went in to get a bite to eat. The group decided to play Catan. Allison and I got our butts kicked, Jerrett got the longest road and either Max or Lydon won (I can't remember who). We were about to start another game when Mom and Aunt Lisa came to get us. We said goodbye to Max; and the moment we left Level One, it started to piss pour rain once again (see the motif of this trip?). We made it to the mall as fast as we could, but then thunder and lightning started again. Mom and Aunt Lisa decided to stay and wait it out, but me, Lydon, Allison, and Jerrett chose to brave it and go back to our hotel and car. The sidewalks and streets were flooding, so Allison and I took off our sandals because we were worried we'd fall and went barefoot. The four of us first tried to take shelter in a hotel entrance as the lightning got closer, but the security guy wouldn't let us, and we hurried to a bus shelter. It was there that we met panicked French girls, and when they noticed we weren't French they switched to broken English. We still couldn't comprehend what they were saying, and they were talking too fast for Allison to catch. Lydon then swooped in with his French and answered their question. The girls said "merci" and left, and then we took the final trot back to the hotel.
Once we were back, we said goodbye to Lydon (as he had to drive back to his uncle's) and went back up to mine and Jerrett's room.

It was noon the next day when I met up with Malcolm, a friend of mine who's working in Ottawa. We tried to go to the Scone Witch, but it was packed so we got ice cream instead we then walked around Parliment Hill and watched boats launch into Rideau Canal. After that, Malcolm showed me this cool little restaurant, and not long later Dad and Jerrett joined us for lunch. Sooner or later, Malcolm had to go, so we bid him farewell and went to find Mom again. It was then I found a dress for Klark and Joanne's wedding, and we headed back to the airport to begin our journey back to the rock.

Despite all the bad weather and line up fiasco, it was still a fantastic and worthwhile trip, like all of my family vacations are.