Our somewhat annual family trip to Ontario started off a little different this time. Instead of going straight to Toronto, we started our adventure in the nation's capital. The home of the Rideau Canal, Parliament Hill, the most visited museum in Canada (which is The Canadian Museum of Civilization) and the famous Canadian Tulip Festival. Mom and I had 48 hours in the city, while Jerrett and Dad joined us on the second day.

After Mom and I checked into the hotel, the guy at the front desked recommended some Italian restaurants; because our "eyes lit up when he mentioned pasta." After what felt like a long time of walking around and going in the wrong direction, we finally found Johnny Farina. The salad and pasta we shared was pretty good.

The next day started with breakfast at a little French cafe, which can only be described as 'adorable'. They use chocolate milk in their drinks, which I thought was pretty interesting and different. Don't even get me started on the pastries, they were 'out of this world.'
Mom and I spent the rest of the day doing some shopping, mainly going to the Rideau Centre (the mall), and doing a lot of walking. When the guys met up with us in the evening, we went to The Cornerstone, the food there was a solid 9/10.

On Friday our day once again started with breakfast at a cafe. Jerrett and I took this opportunity to do some Pokemon hunting. Ottawa is filled with PokeStops. Once noon rolled around, we went on a boat tour through the Ottawa River (which, fyi I highly recommed). The tour guide was pretty cool, and he had a good sense of humor. Medhi told us a bit about the city's history, some of the facts I remembered hearing during my EWC week. The sights included Parliament Hill, an old, majestic looking hotel and a row of houses along the river. These houses are valued starting at 700K, but there's no insurance because it's so close to the water.
The tour ended at the other side of the river. Which, interestingly enough is actually Gatineau, Quebec. We then walked through the Canadian Museum of History. The outside of the structure has no 90 degree corners, as legend says that spirits become angry when they get trapped in corners and the architect wanted spirits to be peaceful. While Mom and Dad went their own way, Jerrett and I decided to go to the kid's area. Not gonna lie, it was fun playing 'avoid the security guard.' We later took the boat back over to Ottawa.

After taking a little break at the hotel, Jerrett and I decided to go for ice cream; but we ended up getting 'lost' in the residential district. Honestly, being from a small town I found it a tad sketchy looking; though the high concentration of Pokemon made up for it.
A while later, we ran into Mom and Dad again. Then, the wild goose chase started. Mom said there was this good restaurant on Slater Street. So off we went, walking around Ottawa. After what felt like forever and walking in circles, Mom looks at us and says "It's at 53 Spark Street." She got a chorus of sighs in reply. We finally found the restaurant (and the worst nachos in Ottawa) but the main course was great.

With supper finished, the little brother and I went to get BeaverTails (it's a pastry okay) for the second night in a row, then met Mom and Dad back on Parliament Hill.

We ended our trip with watching a light show. A bunch of laser lights projecting onto the Parliament Building, explaining Canada's history in such a captivating and unique fashion. It was one of those moments or things that make you feel extremely patriotic. The display was like something like I've never seen before, and it's really hard to put into words. It was the highlight (ha) of our day, and made the detour to Ottawa totally worthwhile. 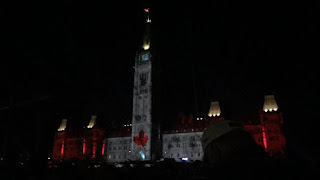 We went back to the hotel once the light show was over, as we had a train to Toronto to catch in the morning. Ottawa was a great stop, and it's one of my favourite cities. I would recommend it to anyone going to Ontario, or anyone who wants to learn more about our country's history.
at August 30, 2016