An Open Letter to My New Roommate

So I've only just recently found out your name. Since come September we're going to be sharing a dorm for seven months, I might as well tell you a little bit about myself.

First, let's start with the basics. My name is Claire. I'm from St. Lawrence. I have brown hair and green eyes. I think I'm a pretty friendly person, and I hope we get along and become friends. You'll most likely learn a lot about me, but here are a couple things you should expect:

Yes, I'll be shy at first and nervously laugh during that first initial meeting, but once I warm up to you it'll be hard to get me to shut up. I'll want to learn about your interests, your hobbies, what you do for fun, things about your family and friends, and what brought you here in the first place. Don't get me wrong, if there's stuff you don't want to share I'll respect that. I really enjoy talking, as complete silence can be eerie sometimes.

#2 I love to play my guitar

By the time we live together, I'll have been playing the guitar for about a year. I practice a lot, so I hope you don't mind the sound of an acoustic fender. I know a handful of songs, a couple being good sing along songs. I hope it'll entertain you, and it will be a bonus if you play an instrument or sing as well.

#3 Home is where the heart is

I'll be making our room as homely as possible (considering my home town is about four hours away). So expect to see a bunch of trinkets and photo frames in my bedroom. If you wanna have a lazy day and just chill out in your pjs all afternoon or evening, go ahead. I'd like our room to be very comfortable and cozy.

I'm not much of a big plate person during meals, because I like to snack throughout the day. Every couple hours you'll find an apple or a granola bar or something in my hand. Oh and I'll also have a mini fridge, which you're welcome to share with me if you want.

(I know we're on the quiet floor, I won't be loud I promise) and I'll probably be up late studying. If you hear anything go bump in the night, it's just me tripping up over something on route to go pee. Also, if you hear quiet sobs, I'm frustrated with math.

If the caption didn't already tell you, I'm a huge geek/nerd/bookworm. I like talking about shows like Doctor Who and Sherlock, and I'm sorry if you get tired of hearing about it. I love to read too, and if a character dies I will probably tear up and look like a mess. I enjoy playing video games, though I'm not overly competitive or good at them. (Unless it's Just Dance or MarioKart, then I will not hesitate to kick your ass). I hope we share a little bit of interest in at least one of those things, and if not; no worries fam.

As cliche and cheesy as this line is, we made it. Most of us have spent the majority, if not all of our school days at SLA. I've been thinking about this post for a while, and now I've figured out how to go about it.

At this point, you're probably thinking "Oh great Claire, another one of those open letter things." Which I can see where that thought is coming from, as ooodles and ooodles of 'Open Letter to Grad Class' posts have been shared on Facebook throughout the year. This one is different, it's suited and tailored especially for you guys, like a prom dress or a tux. This one is unique, just like each and every one of you (oh God that was really cheesy I'm sorry).

We made it. We got through every bad day and stressful test. We came together to be supportive in times of need when unexpected things happened. We put our heads together and got things done on time (shout out to the Grad Decorating Committee). We celebrated game and tournament wins and last but not least our spectacular graduation. 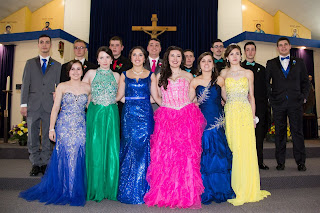 I have so many memories from these past 12 years that I'll hold onto forever. These years seemed to fly by, feels like only yesterday we were going into junior high. I have stories that I'll share with people I meet in the future, and stories I'll tell my kids and grandkids when they ask "What was it like when you were growing up?" That's the purpose of stories, they're meant to be shared. I hope you all have stories and memories to tell as well.

St. Lawrence (or Joe Harbour) is where we grew up, and maybe we are still growing up. We're not quite there yet. Be proud of where you originate from, and always make time to pop back for a visit. I've been told that if you don't, you'll regret it later on.

It was a good ride guys, and I feel like we bonded even more in our senior year. I wish you all the best in whatever path you take. I'm sure there'll be many reunions to come.

To the SLA Class of 2017, enjoy your last year as much as you can, it'll be over in the blink of an eye.

Keeping Up with the Burkes

If you watch reality TV or not, I can infer that everyone (and their Mother) have heard of the show Keeping Up with the Kardashians. This past weekend, Mel, Emily and I had the pleasure of experiencing something similar live and 'irl'.

On Friday, Kenton, Emily and I went to Marystown to pick up Mel. Nothing out of the ordinary happened; it was a casual and pleasurable drive. It wasn't until Saturday, that Keeping Up with the Burkes began.

Anyone who lives in St. Lawrence will confirm that there isn't much to do around here. So, we commenced with the weekend routine of driving around the harbour. Over and over and over. After getting bored of that, Kenton drove up to Plot (the Parish hall parking lot) we hung out there for a bit, then went back to my house. Seeing that is wasn't too late, we went out on a Pokemon hunt for the rest of the night.

Saturday, Mel and I slept in a little. Okay, a bit more than a little; till noonish (oops). Not much later, the twins and Emily came to pick us up. We 'scooted' around town for another while, then decided to go to Lawn for fries and ice cream (Mel had sweet potato fries because she's so sweet). Take a guess what happened when we went back to the car? Kurtis pulled out of the lot, only to get......... A flat tire. Kurt sighed and we all piled out of the vehicle, letting the brothers change the tire. Kenton knew what he was doing and got the car jack, while Kurtis called his parents and grandparents, informing them of what happened. After what felt like forever (and Emily's unhelpful Youtube search), the twins put the dummy tire on the car. Once their Pop double checked the tire's nuts, we made our way back over the highway, not going past 60km/h. Even though we were delayed, we managed to make it back and not miss too much of the soccer game.

The next day, everything was normal again (though we couldn't carry out the original plan we had cause that darn dummy tire). Mel, Emily and I did the stereotypical St. Lawrence thing of going to a soccer game, and spent the rest of the day playing Pokemon GO.

Having something different happen in my hometown was very refreshing, and makes for a good story. It was a weekend I know I'll never forget. 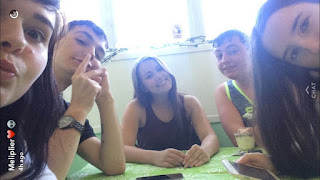 There's always going to be those days where we feel the need of some comic relief. Well, luckily (or unluckily I'm not quite sure) I don't have to look farther than myself. As I have a very long list of embarrassing moments. Anyone who's around me often has probably witnessed me embarrassing myself first hand.

You know the moments where you accidentally say the wrong thing? Yeah, me too.
I'm working at the local hospital gift shop this summer, and one day during my first week a golden aged lady came in to look around. She came over to the counter and eye balled the one dollar candy bags. She said "I wish I could have some, I loved candy."
So I replied "A treat won't hurt, go ahead." Then flashed the woman a smile.
She looked back at me and said "Sweetheart I can't, I'm type 2 diabetic." She then bought her drink and left.
At that moment I wanted to duck behind counter and never come back up. Now that I look back at it, I can recover quickly and laugh at myself.

I know I'm not the only one who who has I-wanna-hide-away moments. Take my best friend Mel for example. She's had her fair amount of embarrassing moments, and she said I can share this one. Mel was at the dentist office not to long ago, and she had to fill out a form of some sort. The waiting room was very quiet and of course, having butterfingers, she dropped the clipboard. Everyone in the waiting room looked at her. If that wasn't enough, she said "Whale, whale, whale." (in reference to the whale iPhone emoji, and a pun on 'well well well'). At that time I can infer that she wanted to run out of the office, burt shortly after the dentist was ready.

One thing you learn when these 'unfortunate events' happen is to laugh at yourself, and not sweat it. Chances are, you're probably going to be the only one who will remember it (or you may forget it, unless your friends or family never let you live it down cause hey, that's what they're for.) So I'll just keep pushing that pull door.
at July 13, 2016 No comments:

Hi again it's me!

Okay well I shouldn't really say hi again cause I've never posted on this before, but whatever.
For those of you who don't know, I'm Claire. I stand at a height of around five feet three inches, I live "around da bay" in Newfoundland and Labrador , Canada (the little island part yeah).
I'm a former Sea Cadet, and an Allied Youth Alumni member. I just graduated high school; yeah it still hasn't sunk into my brain yet either. I play guitar too, and that's fun. I like to think I'm getting better at it.
I started this little blog to record and share my thoughts and adventures, and I hope you'll enjoy and take interest in reading them.
That's all for now!